One of the most important jobs we do as an organization is to represent you, our members, on issues and concerns affecting your businesses. We ask you to please open the survey and spend the few minutes it will take to complete it to provide us with valuable input.

One of Kentucky REALTORS’ top priorities in 2017 is tax reform. During the 2017 State of the Commonwealth Address, Governor Matt Bevin indicated that he plans to call a special session later this year to reform Kentucky’s tax code. In a recent interview, Governor Bevin stated:

“I think people will be surprised at what I am going to be proposing when we have a special session later this year to address taxes and pensions. I mean I do think that we can have overall tax rates come down while effectively gathering more revenue by not exempting so many things. We have so many tax loopholes in this state. We’ve got to move to stopping the production tax where we’re suffocating those that produce the wealth of this state…We should be moving to more of a consumption-based tax."

It is our understanding the Governor hopes to begin unveiling his plan in the next couple months to gain support from stakeholders prior to the special session being called. Current indications are this will take place sometime in September. In order to ensure we understand what tax-related issues are important to you and your business, while also having an opportunity to get in front of the key decision-makers in the Executive Branch and Legislature, we would appreciate you completing the following survey. Your input will be used to establish our Legislative Priorities for the Special Session.

Your input is invaluable to us and our organization's leadership will be using the data and input you provide us to guide them in determining our Legislative Priorities and the strategies we will use to be involved in them.

Thank you in advance for being an engaged member and doing your part to ensure we are the most effective business advocacy organization in the Commonwealth. 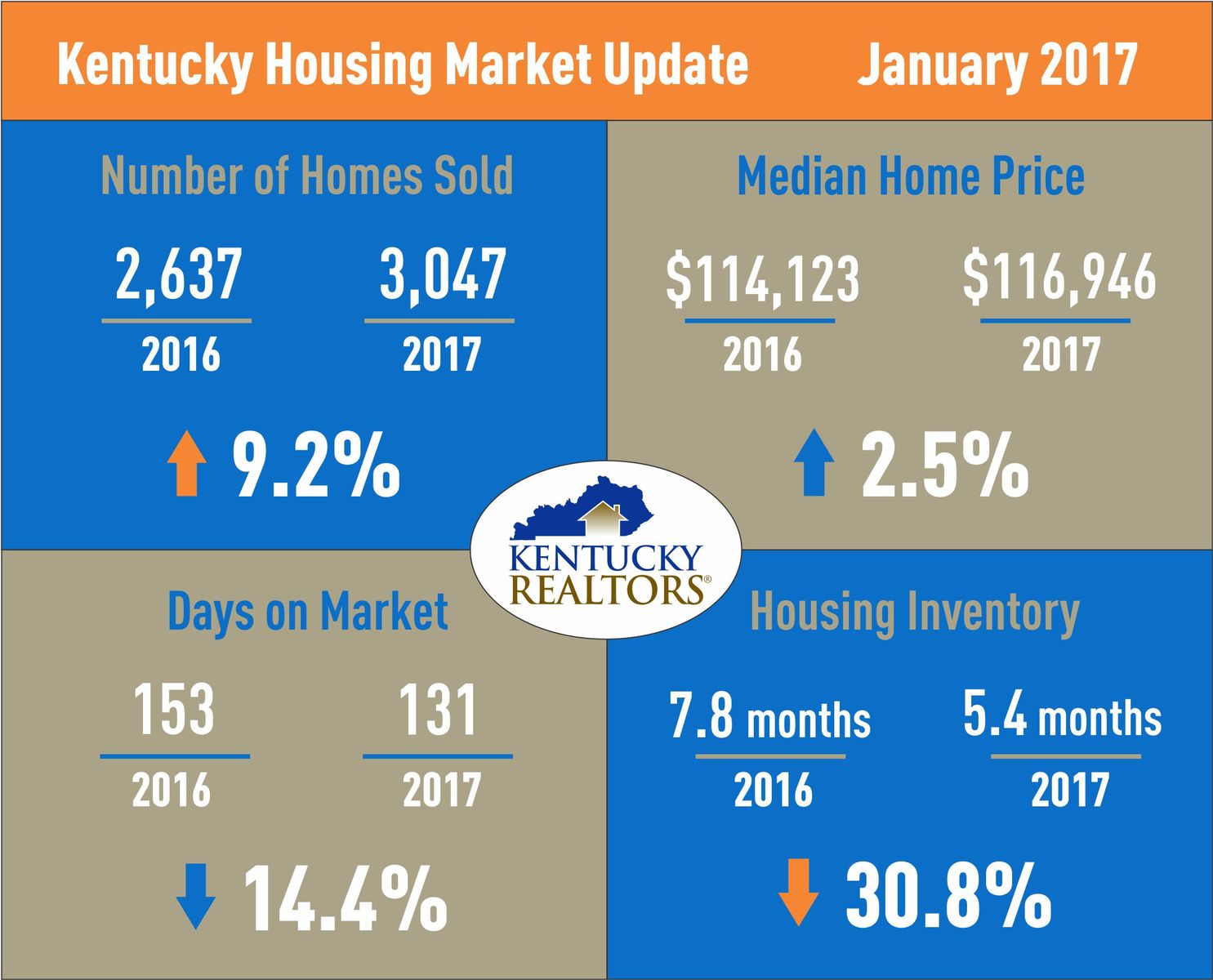 The median price rose 2.5 percent in January to $116,946, up from $114,123 a year prior. In Kentucky, median home prices have increased monthly, year-over-year, in 54 of the previous 61 months. Nationally, prices rose considerably in January as it marked the 59th consecutive month of year-over-year gains.

“Kentucky is still seeing a shortage of inventory, and if the economy continues to improve, more buyers are going to be in the market as the spring selling season approaches,” stated Mike Becker, 2017 president of Kentucky REALTORS®. “Affordability in the state makes it easier to purchase a home, however, there just aren’t enough properties available to meet the current demand, especially for the first-time buyer.”

Inventory levels were down over 30 percent in January compared to the same period a year earlier and days on market were down 14 percent. The housing market continues to struggle with available homes even as consumer confidence soared to its highest level in the history of NAR’s quarterly Housing Opportunities and Market Experience (HOME) survey.

Lawrence Yun, chief economist for the National Association of REALTORS, said “the housing market is off to a prosperous start as homebuyers staved off inventory levels that are far from adequate.” He continued by saying “competition is likely to heat up even more heading into the spring for house hunters looking for homes in the lower and mid-market price range."

With the recent spike in consumer confidence and the number of households that believe now is a good time to buy a home, competition in the housing market may, in fact, remain strong for several months. The recent decision for the Federal Reserve to raise its key interest rate and the indication that two additional increases are likely to occur later in 2017, buyers may be even more eager to jump into the market before the spring season ends. Mortgage rates have inched up over the previous months in anticipation of the Fed increase, averaging over 4 percent in February from a near record low of under 3.5 percent last summer.

“Buyers who are qualified to purchase may want to consider getting into the market sooner rather than later as financing conditions may change going forward,” stated Becker. “Inventory shortages aren’t going to significantly improve which means buyers may also have to search longer than expected to find a home that suits their needs.”

Kentucky REALTORS® is one of the largest and most influential associations in Kentucky. Founded in 1922, Kentucky REALTORS® represents more than 10,300 REALTORS® who are involved in all aspects of real estate, including residential and commercial real estate brokers, sales agents, developers, builders, property managers, office managers, appraisers and auctioneers.

A recent report on housing demand for Fayette County forecasts overall demand for 22,780 new housing units by 2025 including 15,160 new single family residential units, 6,275 units within multi-family structures, and 1,345 units classified as condominiums or "other” units.

The Fayette County Housing Demand Study, sponsored by a consortium of Lexington stakeholders and governmental officials, cited statistics from the Kentucky State Data Center that suggests Lexington will continue to grow at a rate of 1.2% annually thru 2025, yielding a projected Fayette County population of 354,000.

According to Lexington Bluegrass Association of Realtors (LBAR) 2017 President Ty Brown, "The association wants to make sure citizens’ needs are met by accommodating the expected population growth of the community, and this report sets out the very real challenges in the Fayette County housing market moving forward. Fayette residential sales are strong currently, and have been so for a relatively long time. It is a very tight market locally. And the lack of inventory is increasingly concerning.”

Declining inventory, fueled by projected Fayette population growth, will lead to upward pressure on home prices, diminishing housing affordability. A by-product of this increased demand will be that market-rate housing will be less affordable to middle income earners and out of reach to lower-income earners.

Shrinking inventory is creating a market where buyers are scrambling for houses which leads to sellers who are hesitant to sell. Sellers are concerned they won’t have a place to go which feeds into the continued decline of inventory.

Further, the report identifies clearly the effects of the currently unmet housing demand within Fayette County, which is forcing people to travel farther to and from their job into adjacent communities where they reside. Fayette County was home to 164,251 jobs in 2002, and in 2014 the number of jobs swelled to 191,977, equivalent to a growth rate 16.9%.

Job growth and economic opportunity drives the housing industry. A home is where each job goes at night. When communities fail to meet their demand for housing, housing prices rise, people commute further, and the community’s quality of life suffers, as does its infrastructure and environment.

The report also projects that homeownership in Lexington will remain low relative to its historical average, with homeownership only expected to increase to 52.75% in 2025 from its 2015 level of 51.5%. Also, the population continues to trend older with over half of anticipated householders from 2015 to 2025 to be age 65 years or older.

Read the executive summary of the report

Unemployment rates down in majority of KY counties
Friday, March 10, 2017 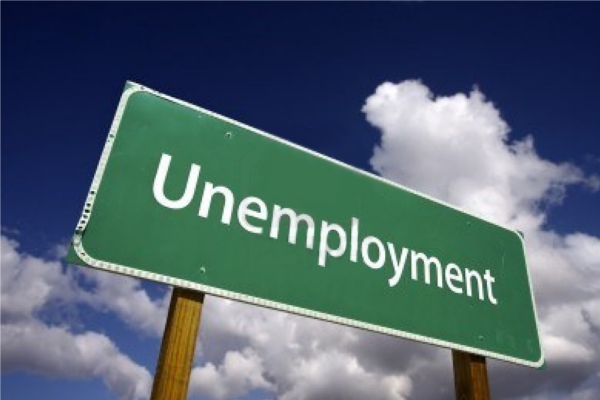 Unemployment rates fell in 90 Kentucky counties between January 2016 and January 2017, rose in 23 and stayed the same in seven counties, according to the Kentucky Office of Employment and Training, an agency of the Kentucky Education and Workforce Development Cabinet.

In contrast to the monthly national and state data, unemployment statistics for counties are not seasonally adjusted. The comparable, unadjusted unemployment rate for the state was 5.8 percent for January 2017, and 5.1 percent for the nation.

Unemployment statistics are based on estimates and are compiled to measure trends rather than actually to count people working. Civilian labor force statistics include non-military workers and unemployed Kentuckians who are actively seeking work. They do not include unemployed Kentuckians who have not looked for employment within the past four weeks. The statistics in this news release are not seasonally adjusted because of the small sample size for each county. The data should only be compared to the same month in previous years.