The unemployment rate for March 2018 was down from the revised 4.1 percent reported for February 2018.

The preliminary March 2018 jobless rate was down 1.2 percentage points from the 5.2 percent recorded for the state in March 2017.

The U.S. seasonally adjusted jobless rate for March 2018 was unchanged from the 4.1 percent reported for February 2018, according to the U.S. Department of Labor.

Labor force statistics, including the unemployment rate, are based on estimates from the Current Population Survey of households. It is designed to measure trends in the number of people working. It includes jobs in agriculture and individuals who are self-employed.

In a separate federal survey of business establishments that excludes jobs in agriculture and people who are self-employed, Kentucky’s seasonally adjusted nonfarm employment increased by 1,200 jobs in March 2018 compared to February 2018. Kentucky has added 4,500 jobs since March 2017, a 0.2 percent employment growth.

“Kentucky’s employment continued to improve in March with employers adding 1,200 jobs and unemployment rate declining to 4 percent. However, as the labor market has tightened, growth in payroll employment has slowed somewhat,” said University of Kentucky’s Center for Business and Economic Research (CBER) Director Chris Bollinger.

Nonfarm data is provided by the Bureau of Labor Statistics’ Current Employment Statistics program. According to this survey, five of Kentucky’s 11 major nonfarm North American Industry Classification System (NAICS) job sectors experienced employment growth from the previous month, while five sectors saw employment decreases in March and one was unchanged.

The financial activities sector gained 300 positions from February 2018 to March 2018, but has 300 fewer jobs than last March. Within this sector, finance and insurance gained 200 jobs in March 2018 and the real estate, rental and leasing subsector gained 100 positions.

The number of jobs in mining and logging did not change from February 2018 to March 2018. Employment in this sector is down by 100 jobs since March 2017.

The leisure and hospitality sector decreased by 400 jobs from February 2018 to March 2018, a 0.2 percent loss. Accommodations and food service declined by 500 jobs, while arts, entertainment and recreation gained 100 jobs in March. Since March 2017, this sector has lost 2,500 positions or 1.3 percent.

Employment in the information services sector fell by 300 jobs in March 2018. This sector has declined by 800 jobs or 3.5 percent since March 2017. The industries in this sector include traditional publishing as well as software publishing; motion pictures and broadcasting; and telecommunications.

Employment in the other services sector decreased by 300 positions in March 2018, but added 1,400 from a year ago. This represents a growth rate of 2.1 percent from March 2017 to March 2018. Other services includes repairs and maintenance, personal care services and religious organizations. 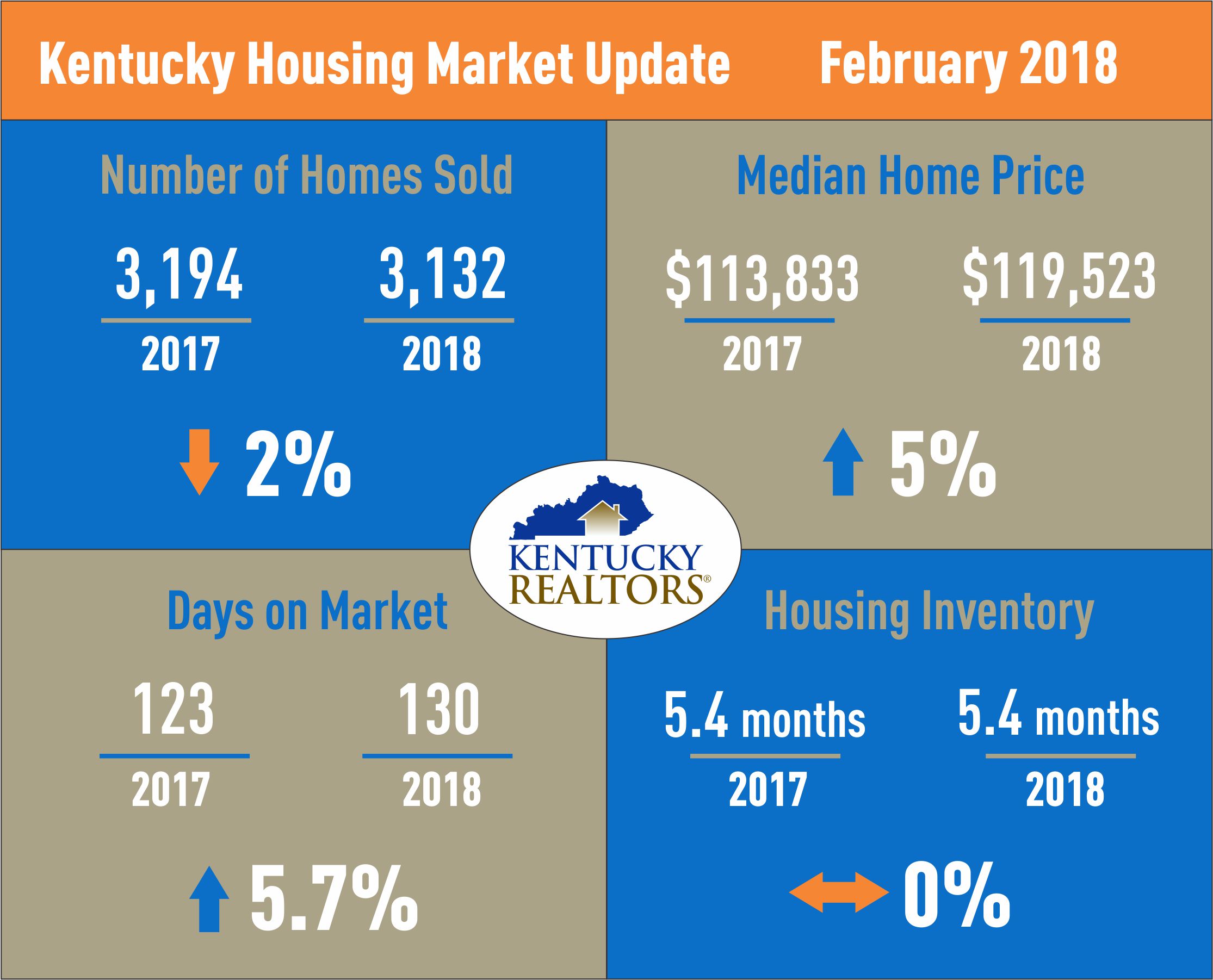 The real estate market in Kentucky is seeing a rise in home prices for the first two months of the year while home sales have leveled off.

The National Association of REALTORS® (NAR) said that sales rose 3 percent in February to a seasonally adjusted annual rate of 5.54 million after two straight months of declines. But a shortage of inventory is creating a challenge for would-be homebuyers.

“We are in an environment where more people are wanting to enter the market to purchase,” said Steve Cline, 2018 president of Kentucky REALTORS® (KYR). “Due to the lack of supply and affordability within the state, homes priced right are being snapped up quickly leaving qualified buyers in multiple offer situations and competing for the same property.”

The increase in prices can be attributed to a strong job market that has elevated demand and competition for available homes, especially since the interest rates have, up to this point, remained low by recent comparisons.

On the flip side, reflecting on the recent Bureau of Labor Statistics (BLS) report for March, Lawrence Yun, NAR chief economist, stated that job openings in the construction industry remain at a historic high mainly because of unusually cold weather around the country. If home builders can readily fill those jobs, then home construction significantly ramps up, and thereby brings more housing inventory to the market.

With the primary selling season coming up, the market may see a shift with more homes coming on the market, as long as higher mortgage rates don’t kick in.

“The slight decline experienced in sales for the first two months of the year still has 2018 near record highs for activity,” says Cline. “With the current homebuyer demand that I’m seeing in the market, the housing market should remain solid throughout the year.”