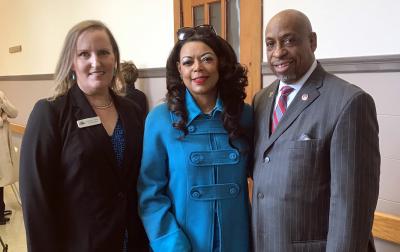 The "Driving Affordable Housing Across America Bus Tour” kicked off in Louisville, Kentucky, at St. Cecilia Senior Housing Apartments, a public-private partnership that provides affordable housing to a portion of Louisville's low-income, senior citizens. In addition to a tour, Secretary Carson participated in a roundtable with community members aimed at reducing regulatory barriers to affordable housing and innovative ways to create more affordable housing, particularly for Louisville's most vulnerable populations. Kathryn Sotelo, President of the Greater Louisville Association of REALTORS® and KYR member, joined Sanders at the event. Also in attendance from H.U.D. was Denise Cleveland-Leggett, Regional Administrator for HUD Region IV. (pictured at center in photo)

President Sanders said it was an opportunity to hear and discuss specific challenges Kentucky stakeholders have regarding affordable housing. “It opens the door for future collaboration as we focus on fair and affordable housing”, he said.

Dr. Carson was pleased with the location chosen as the first stop on his tour across the U.S. "It was a pleasure to kick off our 'Driving Affordable Housing Across America Bus Tour' at St. Cecilia Senior Housing Apartments in Louisville today," said Secretary Carson. "This affordable housing development is a model that should be replicated in other communities across our nation.” 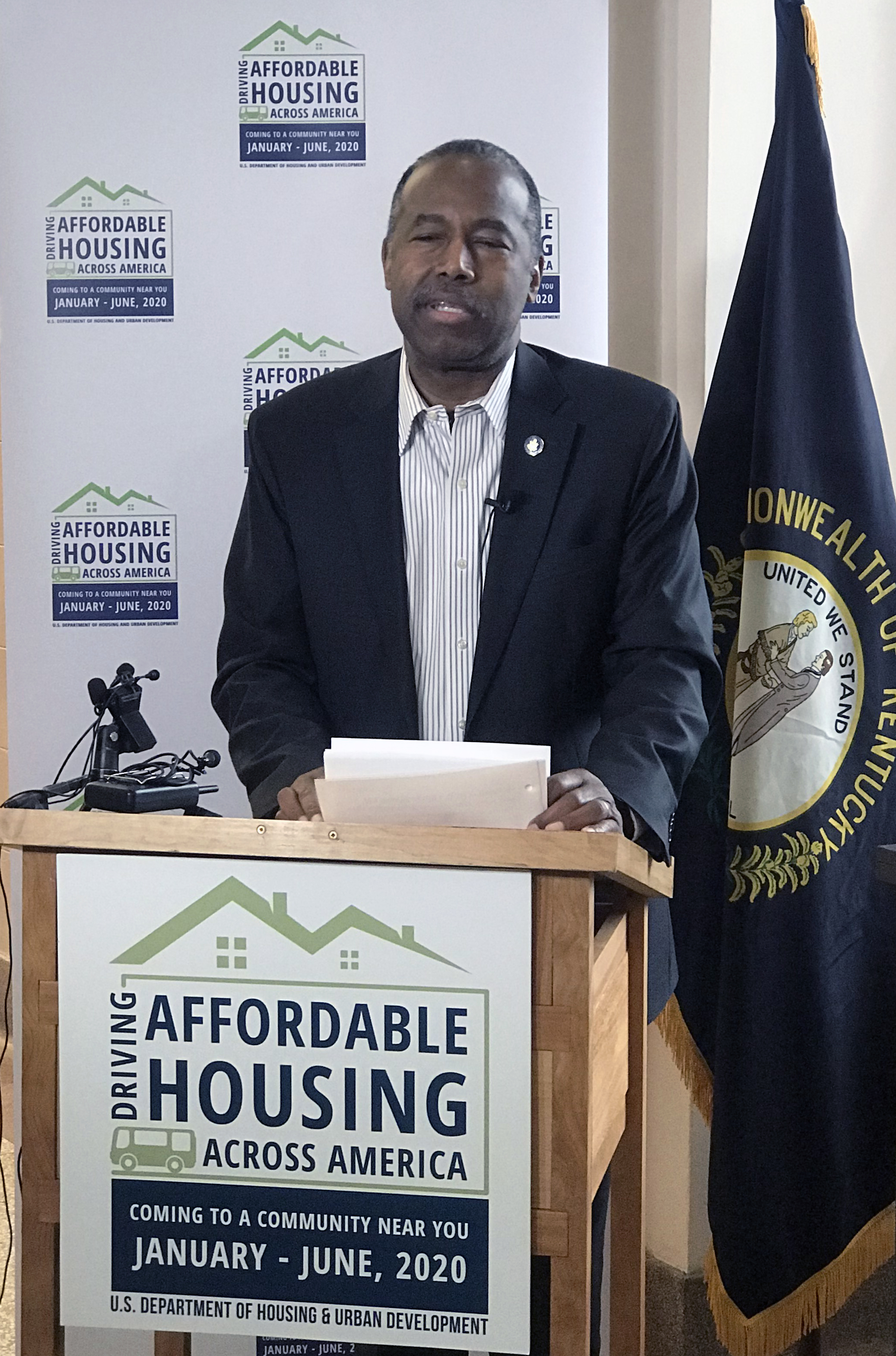 "Families, businesses, nonprofits, and community leaders all have concerns about the rising cost of housing," continued Secretary Carson. "This bus tour is an opportunity to bring everyone to the table so we can work together to eliminate outdated regulations and increase our nation's supply of affordable housing."

The "Driving Affordable Housing Across America Bus Tour" is a part of the work Secretary Carson is undertaking as the Chair of the White House Council on Eliminating Regulatory Barriers to Affordable Housing established in June 2019. The Council's eight Federal member agencies are engaging with governments at all levels-State, local, and Tribal-and other private-sector and non-profit stakeholders on ways to increase our country's housing supply so more Americans have access to affordable housing.

KYR announces the release of the new Residential Sales Contract to be utilized by Kentucky REALTORS® members. 2018 President, Steve Cline, saw the value in a statewide residential sales contract and appointed an advisory group to review the contracts in use around the state and come up with a recommendation for a single Residential Sales Contract that incorporated all the best parts of the various contracts. Led by Chair Janie Wilson, the group felt that the benefits of utilizing a statewide sales contract would include:

•           Risk Reduction and legal protection for agents and consumers

With agents increasingly representing buyers in areas of the state they don’t usually practice, it makes sense for agents to transition to a statewide Residential Sales Contract.  In the past questions about certain unfamiliar parts of contracts would act as speed bumps to the transactions when REALTORS® would need to resolve questions with each other.

KYR President Lester Sanders said it’s his hope that the new contract will take some potential confusion out of the real estate transaction because REALTORS® and agents are sometimes presented with an unfamiliar document during a transaction. “It might reflect poorly if he or she couldn’t definitively answer a question by a client due to never having seen that version before”, he said. “A statewide uniform contract should help REALTORS® better work together and properly serve their clients with great confidence.”

KYR has established a standing Statewide Forms Committee to monitor and quickly react to marketplace changes that necessitate changes to the contract.  Updates to the contract will be made as needed, or yearly, at the minimum. KYR is also planning to work with Kentucky Realtor Institute to develop education classes to train REALTORS® on the use and understanding of the contract.

The contract is now available for download on the Kentucky REALTORS® website and can be found under association documents in the Members section. Login is required.

KYR Mourns the Loss of Board Member Bobby A. Hunton
Tuesday, January 21, 2020

The Bowling Green native was born December 6, 1954 to the late Bobby Gene and Eleanor Jean (Miller) Hunton. Bobby was active in many professional and civic organizations including the following: former president of Winelectric, owner and electrician at Southern Electric and Lighting, Realtor at Berkshire Hathaway HomeServices, cofounded Hope for Homeless in 2012, and co-founder of Stuff the Bus in 2005. He was active in the REALTOR® Association of Southern Kentucky being honored as 2013 Realtor of the Year and serving as its 2014 President.

He served Kentucky REALTORS® as a board member having been elected Director at Large in 2018, serving as Region 2 Director, and as the Chair of the Bylaws Committee.

Bobby was a 1972 graduate of Warren Central High School and went on to receive a B.S. in Engineering at Western Kentucky University. He was also a Kentucky Colonel and a member of Calvary Baptist Church.

Funeral services will be held Thursday at 1 p.m. at the J.C. Kirby & Son Lovers Lane Chapel in Bowling Green with visitation from 2 until 8 p.m. Wednesday and after 9 a.m. Thursday.

As quoted in a 2016 interview with the Bowling Green Daily News, Bobby saw firsthand what students needed in school supplies when he was a student at the old Rockfield Elementary School. "I saw how teachers had to take their own money to buy school supplies for the kids. ... They don't make enough money to do what they do." In lieu of flowers, donations of school supplies or monetary donations to Stuff the Bus will be accepted at the funeral home.

Further details on arrangements can be found here. 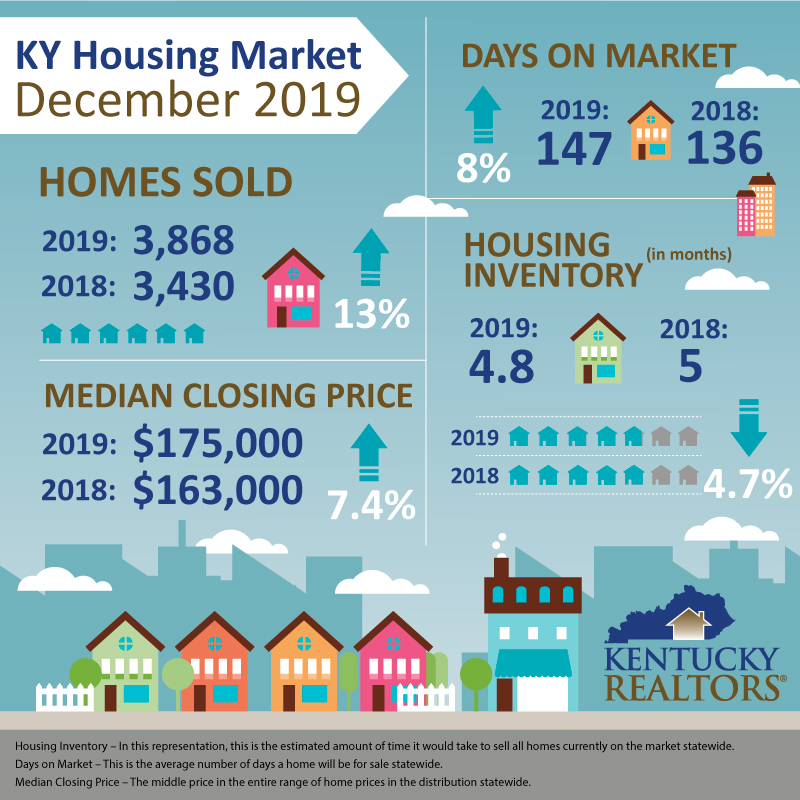 2017 set the bar as the year to beat for home sales in the Commonwealth. With booming economic growth seen in the U.S. over the past eighteen months, it didn’t take long to top those marks set just two years ago. The closed listings level topped 50,000 homes sold for the first time in Kentucky history. December sales that topped the 2018 mark by almost 13% pushed 2019 Kentucky home sales to 50,891. This crested over the previous record (49,574 in 2017) by 2.5%. Steadily increasing prices due to rising demand ushered the total sales volume mark into record territory as well. $10.4 billion in residential real estate changed hands in 2019.

“Sales prices continue to rise, but I am hopeful that we will see price appreciation slow in 2020,” said Lawrence Yun, NAR’s chief economist. “Builder confidence levels are high, so we just need housing supply to match and more home construction to take place in the coming year.” 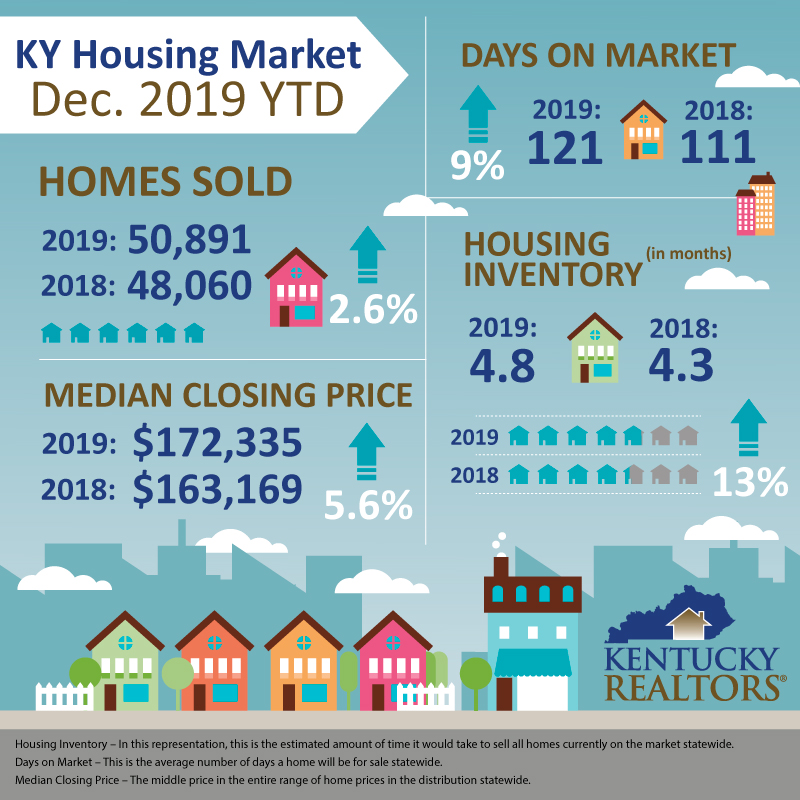 December’s days-on-market (DOM) figure rose 8% over last year’s mark to 147 days. This increase is indicative that homes that have been on the market for some time are finally selling as demand is steadily increasing without an adequate supply of newly listed homes to satisfy consumers.

Lester Sanders, 2020 President of Kentucky REALTORS®, says that increasing home prices highlights the issue of housing affordability that the association is trying to bring to the forefront in 2020. “Kentucky’s communities can suffer even when the housing market is buzzing”, Sanders said. “REALTORS® will continue to advocate for Kentuckians to reduce the cost of buying a home and protecting homeowners’ rights.”

Homes available for sale remain under the ideal level of a 6-month supply. The December figure of 4.8 months of inventory is down 4.7% from last year’s figure.

Kentucky REALTORS® (KYR) announces a new initiative for 2020 that will allow REALTORS® to get further involved and give back to their Kentucky communities. The Community, Economic Development & Housing Affordability Grant Program (CODE) is a way for local REALTOR® Associations to play a leadership role in making their communities a better place to live and work.

National Association of REALTORS® (NAR) President Vince Malta gave the charge to REALTORS® to drive community development, promote housing affordability, and spur economic development. NAR’s Strategic Priority for 2020 also promotes enhancing the value of membership allowing us to, ‘own who we are’ and “lift as we climb”.

KYR President Lester Sanders said “the CODE Grant Program is a way for KYR to give back to its membership, directly affecting local communities and individuals. This initiative is just one of many ways that KYR continues to advocate for the citizens of Kentucky”, he said.

During 2020, KYR will make $60,000 in grant funding available to qualified programs and projects across Kentucky. This will entail $10,000 in funding for a project(s) within each of the state association’s six regions. Initiatives that drive economic growth, make quality of life improvements and support homeownership are the focus of this program. Grants may be used for community enhancements such as recreation areas that have an economic impact, projects that foster collaboration between stakeholders to develop plans to revitalize blighted, unused, or underused commercial space, or perhaps host educational activities to address affordable housing issues.

It is Sanders’ hope that as one of Kentucky’s largest and most influential trade associations, KYR can provide significant leadership in its communities to drive economic growth, promote community development and help more Kentuckians realize the American Dream of Homeownership.