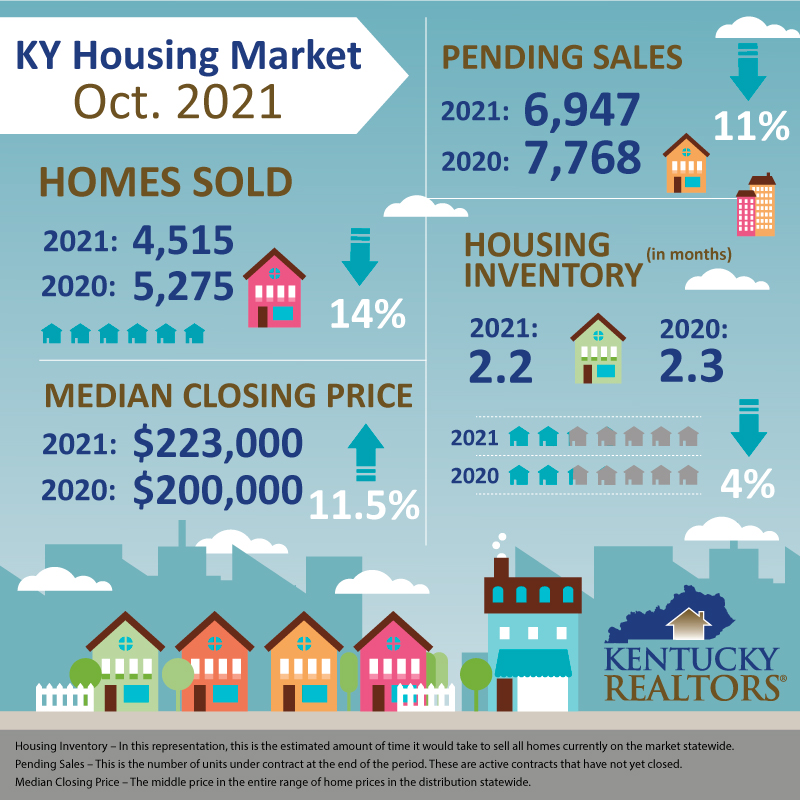 Pending sales in October were down about 11%, indicating that the housing market is continuing its gradual slowdown into November. “Now is a great time to think about selling if you have been putting it off”, said Charles Hinckley, President of Kentucky REALTORS®. “Inventory is rising which means there is more opportunity for consumers to find that new perfect fit for them.”

Nationally, existing-home sales increased in October, marking two straight months of growth, according to the National Association of Realtors®. Two of the four major U.S. regions saw month-over-month sales climb, one region reported a drop and the fourth area held steady in October. On a year-over-year basis, each region witnessed sales decrease. 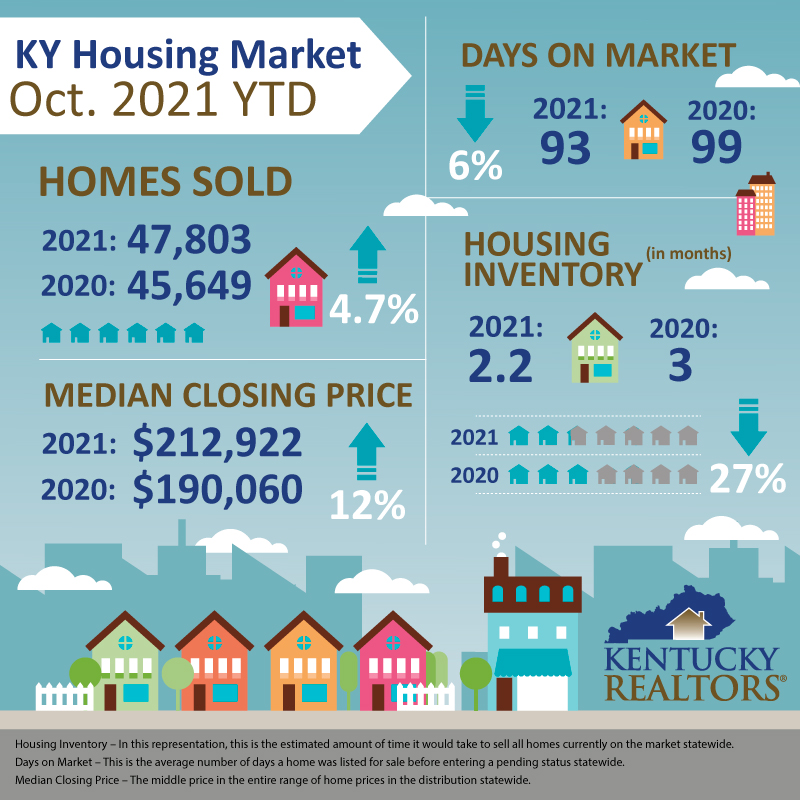 The median sale price of homes in Kentucky rose slightly to $223,000 which nearly tied the record high from July of $225k. The remarkable statistic remains the jump in median price from just before the pandemic. October 2019 saw that number reach $175,500. The October 2021 figure shows a 25% increase in just 2 years. “Wealth building has always been a key benefit of property ownership”, said Kentucky REALTORS® C.E.O. Steve Stevens. “The value increases over the past 18 months have affected the consumer’s ability to enter the housing market, but homeowners have simultaneously enjoyed record equity gains.”

Sales volume continues to outpace last year’s figures. Through October, closing sales volume totaled $11.9 billion. This is over 17% ahead of the 2020 year-to-date volume amount of $10.1 billion. The Kentucky housing market is on-track to shatter last year’s record sales volume of $12.4 billion and nearly double the figure from just five years ago.

KYR and the Kentucky REALTOR® Institute are excited to announce the launch of “Fairhaven:  A Fair Housing Simulation”. 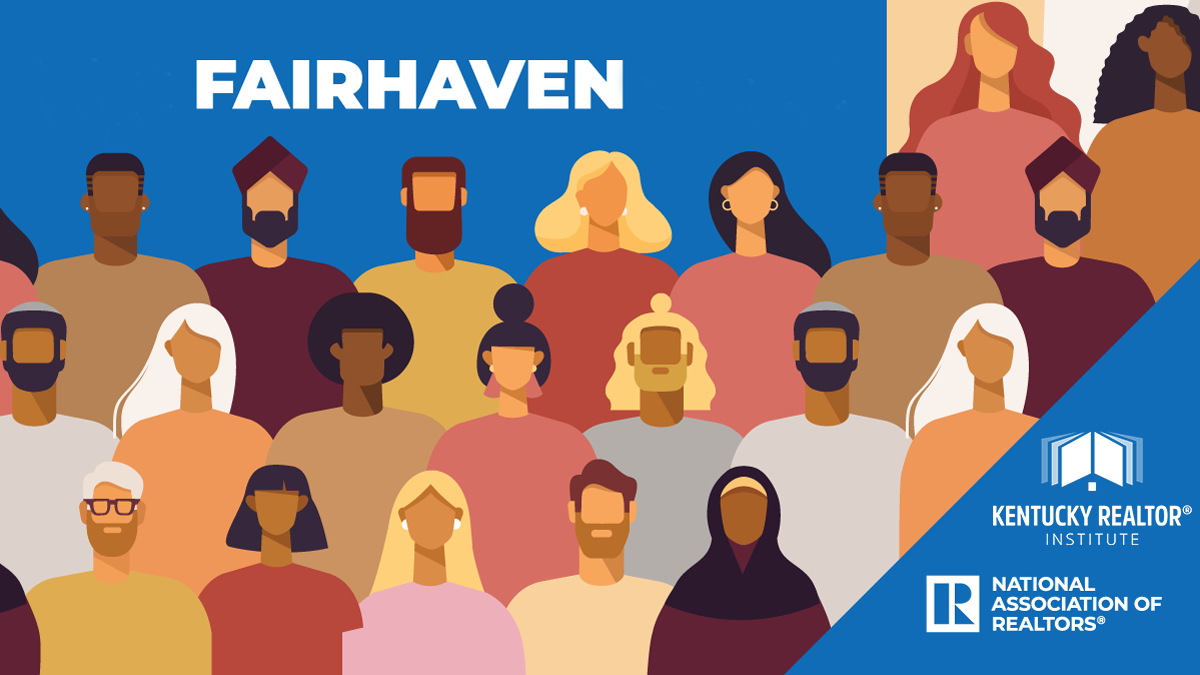 This is a new course that is offered FREE for Kentucky REALTORS® (KYR) members and provides CE/PLE hours for licensees. It was written several months ago and submitted for approval from the Kentucky Real Estate Commission as a for-credit course. Now, KYR Members may now go to the Kentucky REALTOR® Institute website and register for the course and receive continuing education or post-licensing credit in the Commonwealth.

“Fairhaven: A Fair Housing Simulation” was adapted with permission from the Fairhaven simulation developed and offered by the National Association of REALTORS® (NAR) making Kentucky the first state where this course is available for credit. The original course from NAR uses the power of storytelling to help members identify, prevent, and address discriminatory practices in real estate. Inspired by real stories, this innovative online experience has agents work against the clock to sell homes in the fictional town of Fairhaven while confronting discrimination in the homebuying process. Learners will also walk in the shoes of a homebuyer facing discrimination. The training provides customized feedback that learners can apply to daily business interactions.

“REALTORS® have a track record of improving the communities where they work and live”, said Steve Stevens, CEO of Kentucky REALTORS®. “Combating discrimination, whether it is intentional or not, within the housing industry is just another way to strengthen our communities and make the American dream of homeownership a reality for more Kentuckians”.

To register for the course visit the KRI Fairhaven page at https://kyrealtorinstitute.com/fairhaven-fair-housing-simulation.

For more information contact Nicole Knutdson or Suzanne Reeves at 859.263-7377. 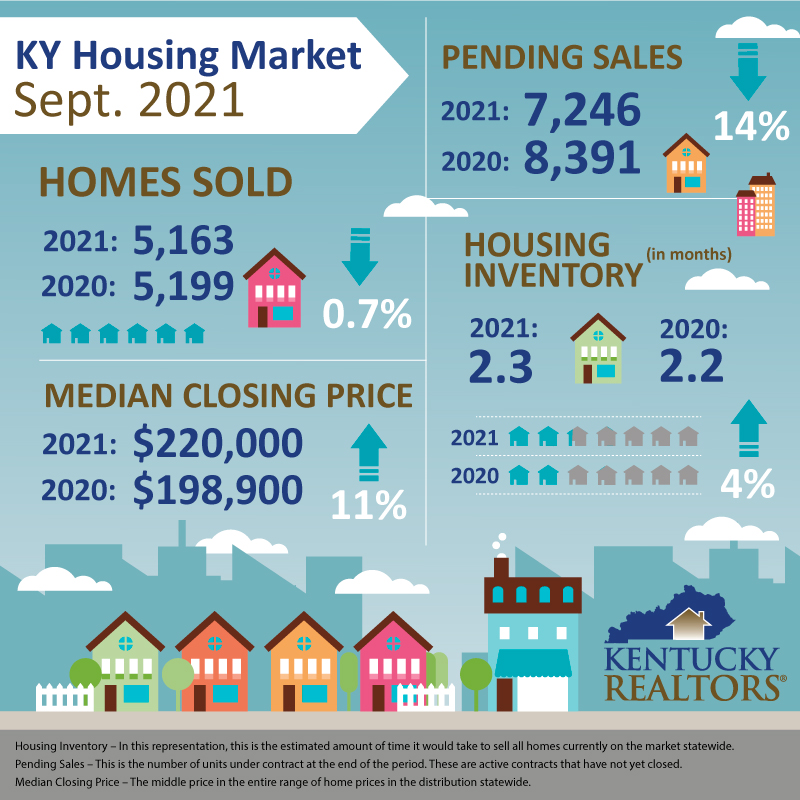 It was only two years ago (2019) that the sales volume figure for the year for Kentucky residential sales topped the ten-billion-dollar mark. It was a milestone that was the result of a booming economy and record low unemployment rates. This caused more homes to sell but the median price did not increase sharply. The pandemic ushered in a time when home prices soared quickly. This, coupled with record sales counts, meant that sales volume would hit record highs more quickly than ever. For example, 2021 only needed the first three fiscal quarters to top that ten-billion-dollar level. Year-to-date sales volume through September reached $10.74 billion (up 20% over 2020).

Closed sales were down slightly to 5,163 from Sept. 2021 (5,199). Pending sales in Sept. were down almost 14% over last year, signaling a continued slowing of the frenzied market pace of the spring and early summer. “We anticipate a steady pace of listings coming to the market”, said Charles Hinckley, President of Kentucky REALTORS®. “A number of factors are pointing to more choices being available to those that are ready to purchase property.”

Nationally, total existing-home sales, completed transactions that include single-family homes, townhomes, condominiums and co-ops, rose 7.0% from August to a seasonally adjusted annual rate of 6.29 million in September. However, sales decreased 2.3% from a year ago (6.44 million in September 2020).

"Some improvement in supply during prior months helped nudge up sales in September," said Lawrence Yun, NAR's chief economist. "Housing demand remains strong as buyers likely want to secure a home before mortgage rates increase even further next year." 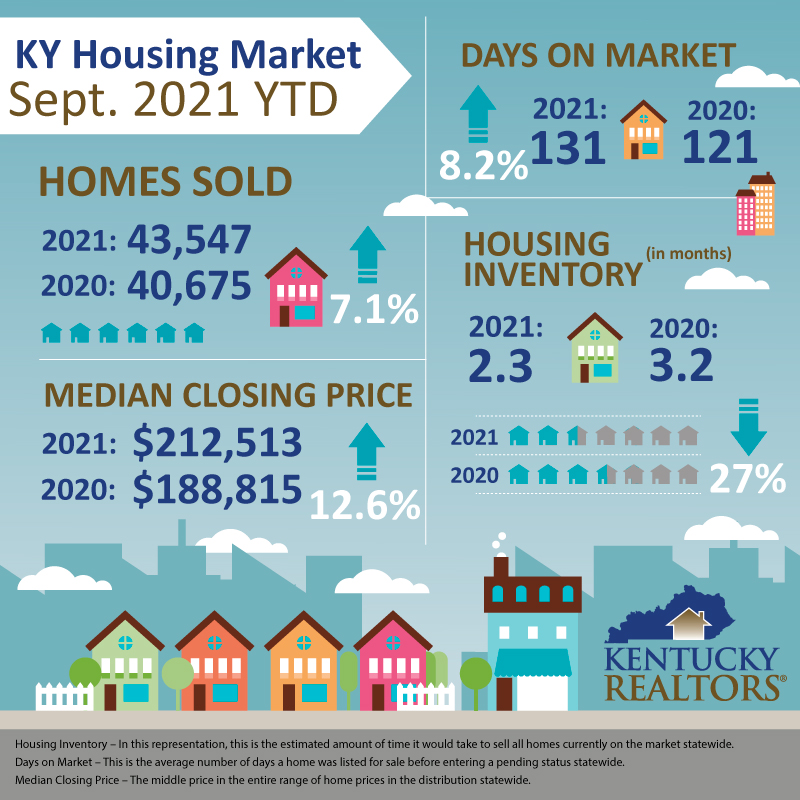 The median sale price of homes in Kentucky remained steady at $200,000, which is up by eleven percent over last year. “Prices are finally leveling off”, said Kentucky REALTORS® C.E.O. Steve Stevens. “We will continue to advocate, for policies and programs that encourage more new home construction to help ease the strain on inventory.”

Housing inventory continues to hold at 2.3 months in Kentucky, while the nationwide average sat at 2.4 months in September. Experts agree that a stable housing market contains about 6 months of inventory.

Distressed sales in September remained low at only 8 units. This indicates that programs put in place, such as mortgage forbearance, were effective in keeping Kentuckians in their homes. This could change soon, however, as programs will begin to expire. It remains to be seen how many new listings will be created if owners that were adversely affected by the pandemic can’t afford their current mortgage.